The day started early with a 6am wake up and a 7:00am departure from Beverly. Our whole team was meet at Dr. Howard Weinstein‘s house in Newton to run our LAST long run of the season before Marathon Monday. When we arrived at his house, it was packed with other MGH team members. Perhaps the BEST part of the whole morning was meeting the fabulous Kelly Sarno, my IG bestie. It was like we were long lost friends! We picked up our SWEET MGH team tee-shirts, too. This isn’t what we’ll be running 26.2 in, but our whole fan club will be sporting them at the Mile 20 Party. We munched on some last minute fuel, and boarded the buses for the drive out to the marathon starting line in Hopkinton. Once we were boarded and moving, there was no turning back. Our only option was to JUST RUN the 20 miles back to Howard’s house. 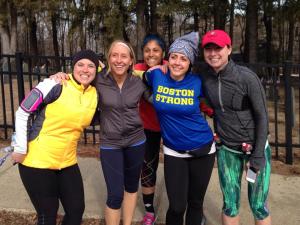 Ready at the starting line

When we arrived in Hopkinton, there were so many runners. I recognized all the Team in Training shirts right away (gotta love that PURPLE), and most people had crowded around the “start” line. I really didn’t know this was such a well organized training run. I thought it was just going to be our group!  I have seriously run real races that had less spectators than this run. The Boston Marathon is a celebration of the entire city, and the volunteers, and people along the route were SO proud to be out helping the marathoners-to-be. We high-fived kids in their front yards in Ashland. We were pumped up by a front-stoop DJ at Mile 10. Shops along the route in Wellesley left out buckets of water and Gatorade so that we could grab them if we needed them. Every single fire station offered a pit stop, complete with music, bathrooms, and candy. And after a week of tragedy, they were still out there, putting a smile on our faces, and offering encouragement. Boston Police held up traffic at every intersection for the runners so that we could cross safely. It was all so overwhelmingly generous.

Signs were placed the entire 20 mile route for our safety

Miles 1-3: We were off in Hopkinton We starting our run with Kelly, MJ and Jess and I think you could probably hear us before you could see us coming. Chatting, laughing and stopping for a few key photo ops made the first few miles fly by. At the first mile marker, there was a tree of running sneakers in honor of Meg Menzies who was struck and killed by a drunk driver while out on a morning run in Virginia, #megsmiles.

Miles 3-5: We hit Ashland at a pretty good clip. Marissa and I separated from the group and plugged in to our music.

Miles 5-9: Framingham. We passed our MGH team pit stop at Mile 5, but didn’t stop for too long. We had 15 more miles to run! We stopped briefly at the TNT table around mile 8 to grab some water.

Mile 10: HALFWAY! As we closed in on Natick Town Common, we saw the best sign of the day: 10 MILES TIL TAPERTOWN! That fired me up! MGH had a table set up, and we stopped for a second to stretch and grab some snacks. I have to say, Swedish Fish never tasted so good.

Miles 11-12: The road got residential, and we had to switch sides of the street as we climbed up a hill to reach Wellesley College.

Mile 13: The small town of Wellesley rolled out the red carpet for marathon runners. Stores had buckets of water and Gatorade sitting out for us, and fans were cheering us along with cow-bells. I had to keep reminding myself that this was just a training run. I pictured us crossing this point on Marathon Monday, and we could say that we were halfway to home!

Mile 14-16: Heading down Washington St in Wellesley, we knew we were getting close to the turn onto Comm Ave. A father/daughter combo was handing out lemonade and water from their driveway, and we happily took them up on it. Pretty much as this point, we were taking food and drinks from every stranger we met.

Mile 17-20: At Mile 17, runners turn right onto Comm Ave, which is a crucial part of the race. The crowds (if they aren’t already dense) get thicker as the route turns towards Boston. The Newton Fire Station was amazing. The guys had a whole spread of goodies, water and refreshments and even opened up their bathrooms to a bunch of weary runners. The last few miles were definitely the toughest. We took some short walking breaks to stretch our legs out, and switch up our cadence. At mile 19 we met a woman who was shuffling along with a TNT shirt on, so we started chatting. She beat cervical cancer THREE TIMES and is running her first marathon. Meeting her and chatting passed the time, and before we knew it (or, in what felt like an eternity) we finally hit the Heartbreak Hill Running Company at Mile 20. We did it!!

Tapertown, here we are! We have some light runs the next few weeks, but we’re ready for the Big Show. 21 days… 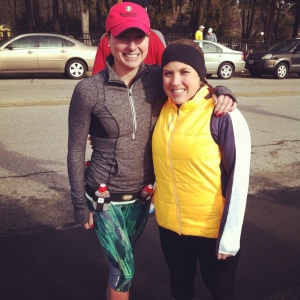 One thought on “Welcome to Tapertown! – 20 Mile Run Re-cap”